Nine families or individuals who live throughout Gibbsboro filed the lawsuit in U.S. District Court in Camden as a personal injury class action against Sherwin-Williams.

The lawsuit alleges Sherwin-Williams, a Fortune 500 company, contaminated the town’s soil and groundwater with unsafe levels of lead, arsenic and other carcinogens that have caused a cancer cluster in the borough.

The plant, a paint burn site, a separate dump, Kirkwood Lake, lakeside properties, and multiple connected streams and their banks are part of a Superfund cleanup site that stretches for 1.5 miles through Gibbsboro and into Voorhees. The Environmental Protection Agency (EPA) is overseeing the project. 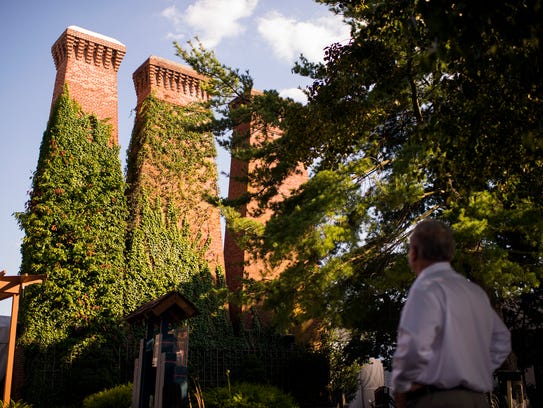 Gibbsboro Mayor Ed Campbell stands by brick exhaust stacks from an old Sherwin-Williams paint and varnish manufacturing plant Wednesday, Aug. 9, 2017 in Gibbsboro, New Jersey. While the remaining stacks are non functional and serve as historical tributes to the town, the soil underneath is heavily contaminated from years of paint and varnish manufacturing. (Photo: Joe Lamberti/Staff Photographer)

Some members of the nine plaintiff families have been diagnosed with cancer or other serious health conditions, including children and one child as young as 3 months old, the suit contends. The contamination has migrated to surrounding residences and businesses within Gibbsboro, causing a cancer cluster within the town, according to the lawsuit.

Most of the plaintiffs live outside the boundaries of the designated Superfund sites.

“It is my firm belief that there has been contaminant migration beyond some of the Superfund sites and that this has caused cancer among some of the plaintiff adults and their children, including a 3-month-old baby,” said Haddonfield lawyer Craig Mitnick, who represents the residents.

“You have a company who claims to be an environmentally responsible corporation yet what steps they have taken have been superficial to residents thus far.”

The lawsuit seeks an order requiring Sherwin-Williams to promptly and completely remediate hazardous chemical levels to or below state Department of Environmental Protection and EPA background levels from class members’ properties.

It also seeks testing, medical examination of all plaintiffs and compensation, including for loss of a plaintiff’s property value.

“The company just received the complaint and has no comment at this time,” Sherwin-Williams Communications director Mike Conway said Wednesday.

The residents are: Brad and Christen Lafferty and their daughter; Corrine and Lauren Procajlo; Sandra Keating; Spencer Pope; Michael and Lisa DiGiovanni; Gina and Anthony Tartaglia; Scott and Kirsten Littlefield and their daughter; Dawn D’Orazaio and Gina Hyndham.

In 1999, the New Jersey Department of Health and Senior Services and the Agency for Toxic Substances and Disease Registry concluded an urgent health hazard existed to children and adults who lived, worked and visited the Sherwin-Williams Site areas.

The Sherwin-Williams facility was permanently closed Sept.1, 1978. Developer Robert Scarborough bought the property in1981 and rebuilt the former paint manufacturing plant into a robust business complex known as the Paint Works Corporate Center, which later was sold to Brandywine Realty trust.

Mitnick is one of the lawyers still involved in another personal injury class action by thousands of professional football players and which gained national attention.

The players sued and then tentatively settled with the National Football League for $675 million to compensate them for brain injuries they believed were caused by suffering blows to the head during games. The settlement awarded them financial and medical benefits.